​All about James (Jim) lentz

A stained glass window of ‘Lady Justice’, similar to one in the Old Cuyahoga County Courthouse, where Jim Frequently practices. 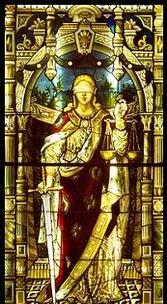 The Legal Aid Society of Cleveland

Jim studied law at Case Western Reserve University in Cleveland, Ohio. Jim graduated from Case in 2000 and passed the Ohio Bar Examination in May 2001.  Jim was privileged to earn a license to practice law in Michigan by admission in November 2008,

Jim has practiced before the Court of Common Pleas in Cuyahoga, Lorain, Erie, Summit, Lake, Geauga, Franklin, Ottawa, Ashland and Montgomery Counties in Ohio, in addition to a number of municipal courts.  In Michigan Jim has experience practicing before the courts of Ingham and Livingston Counties.

Jim is also experienced in Appellate Practice, appearing before the Eighth District and the Second District of the Ohio Court of Appeals.

Jim was born and raised in the Chicago Suburbs.  He granduated from the University of Illinois with a degree in Business Administration.  His Master of Arts in Communications is from Michigan State University.